My brilliant dad brought me up on a sound diet of Beatles, Beatles, Monkeys and more Beatles. I know and love their happy vibe and ability to get a room full of people singing along right from the opening chords. My parents also set me up to adore musical theatre, which has become a life-long passion. For me, musical theatre at its best conjures a spectacle of storytelling wizardry, full of song and (often) dance, that sends your emotions spiralling and leaves you wishing you were up onstage revelling in the fun. When it comes to honouring the musical theatre label, I am in the Michael Billington camp, wanting more from a night at the theatre than the performance of ‘Let It Be – the Beatles Musical‘ had to offer. However, putting the ‘musical theatre’ label aside and accepting the concert for what it is – a journey ‘back to the magical sixties’ and forwards through the decades – made this ‘museum’ experience a foot-tapping and fun family night out for Dad’s birthday treat: and there was a really great sense of the feel-good factor in hearing and seeing favourite songs performed live. 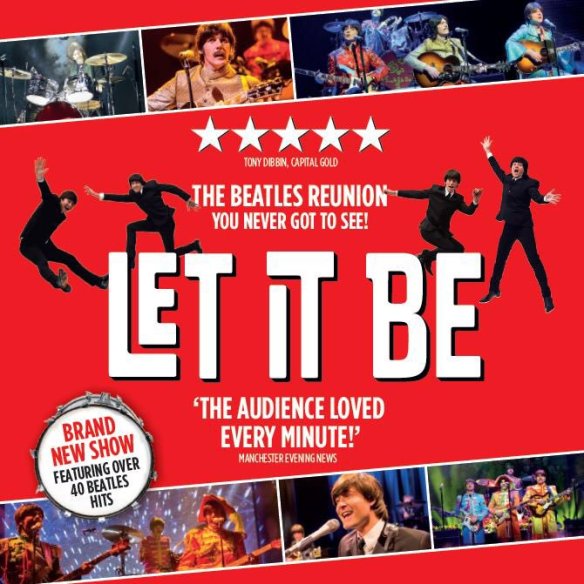 Act 1 builds gradually through a series of sets addressing the different eras in the rise of Beatlemania. The humble beginnings are shown under the simply lit black box stage of the 1963 Royal Variety performance, where ‘the loveable mopheads’ had graduated from the Cavern. Here the tribute band presented popular but understated classics including ‘I Saw Her Standing There’ and ‘She Loves You’ (link to original footage of the Beatles Live in 1964). After a brief interlude where the set is changed and we are treated to era-marking advertising and historical references on the four (large) box televisions surrounding the pros arch, we are reintroduced to the band in their notorious beige tunic uniforms at the Shea Stadium in the USA. ‘Help!‘ is accompanied by footage of fans screaming, crying and fainting to show the growing wave of hysteria in the Beatles fandom. It became distracting to see these short clips looped so often throughout the song (the multimedia side of the production was much better developed by Act 2) as the 1960s crowd reaction served only to highlight the contrast to the quiet and polite behaviour of the Cheltenham audience. We were beginning to wonder whether we were allowed to clap along. Nevertheless, at the opening strains of ‘Twist and Shout‘, excitement rose and we were called to our feet to dance our hearts out and the Everyman audience responded willingly.

Another interlude made way for bigger and better things and the band returned en spectacle. The redressing of the stage and cast saw dry ice with vibrant and colourful lighting arriving alongside the first appearance of the cast’s nouveau moustaches and Lennon’s iconic glasses.  The trademark kitsch Sergeant Pepper uniforms and flower filled set (complete with palm tree) were illuminated in front of psychedelic projections revealing the incoming 70s and reflecting the band’s monetary success and growing flamboyance. 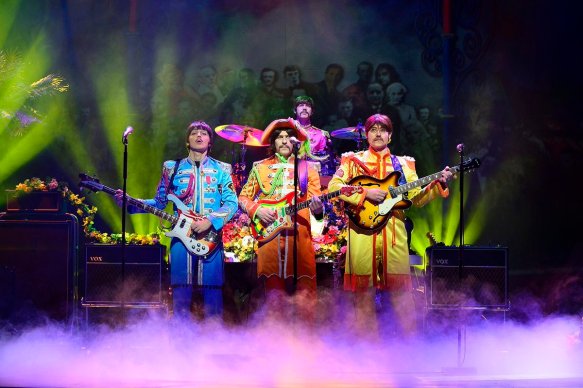 Although dialogue is minimal, compering is provided, as it would have been, by the ever-polite Paul McCartney, played by Emanuele Angeletti, and the charismatic Michael Gagliano as John Lennon. Both performers nail the accents for their speaking and singing appearances and have clearly devoted many years to studying the idiosyncrasies of their individual characters’ speech patterns and mannerisms. Angeletti (who began working in Beatles’ tribute bands in Italy in 2000) has honed the look and pout of Paul McCartney. He sports the high cheekbones and drooping eyelids, playing coy and bashful to the nth degree. He is spot on with the accent and makes full use of the sideways head bob, all while playing the guitar left handed. Gagliano exudes the Lennon ‘It factor’ and charismatic persona that lights up the stage between songs when he is seen to be goofing around and chiming in with infamous phrases – ‘if you’re in the cheap seats, stamp your feet; everybody else, rattle your jewellery‘- to much delight.

In the second act we are asked to ‘Imagine the reunion that never was‘ and scoot forwards to John Lennon’s birthday in 1980. The lighting turns on the audience. Technology is rocketing forward and the crowd are as much a part of the act as the band. ‘Penny Lane‘ was a crowd favourite accompanied by colourful graphics that were as bonkers and random as the original music videos and lyrics. The only thing missing was the horse montage… even the yellow submarine was there in technicolor.

The band are now very much a distinguishable collection of individuals. Paul McCartney’s smooth locks, sparkling shoulders and shiny black sweatpants are only outshone by Angeletti’s polished two-tone shoes; Gagliano’s Lennon looks younger in double denim and shades to replace his specs; John Brosnan’s, George Harrison – ‘the quiet one’ – side-steps his way to the foreground having cleaned up his hairy act with a white suit; and Ben Cullingworth evolves from being the cute one into superstar drummer as Ringo Starr nods to evolving fashion trends by accessorising his new look with a fashion-over-function scarf and slicked back hair. It is great to see Brosnan and Cullingworth come into their own in this act. We get to hear each owning the lead vocals and the evolving musical styles of songs penned by each of the Beatles’ guitarists: including Angeletti’s solo rendition of Lennon-McCartney’s ‘Blackbird‘, George Harrison’s ‘Here Comes the Sun‘ and ‘My Sweet Lord‘, and Lennon’s seminal ‘Strawberry Fields Forever‘, which also showcased Gagliano’s talents on the piano. Brosnan’s ‘While My Guitar Gently Weeps’ (originally performed with Eric Clapton) was a touching and impressive tribute whereashearts raced along with the Bond theme ‘Live and Let Die’, written by Paul and Linda McCartney and originally performed by Wings. 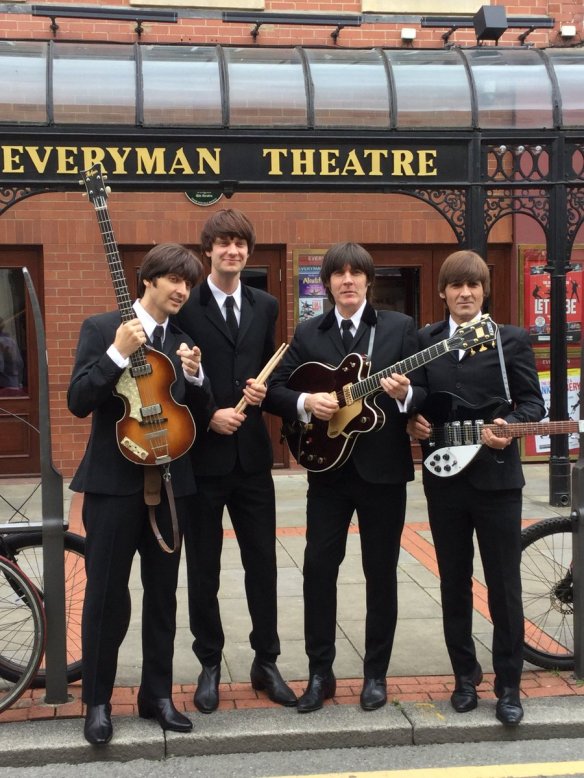 Thankfully the songs had not been forced into a trite storyline for this showcase of the past masters; the unequivocal tribute concert celebrates the evolution of the style and music of one of Britain’s most popular bands – and to that we can twist, shout and throw our hands up in favour. Ultimately, the company provide a great evening out for any Beatles fans wanting to ‘come together’ with a like-minded crowd to enjoy 40 of their favourite tracks played live by performers with a real knack for looking, sounding and behaving like the real thing.

The Let It Be tour continues to Liverpool, Nottingham, Hull, Edinburgh, Dartford and Manchester over the coming weeks. 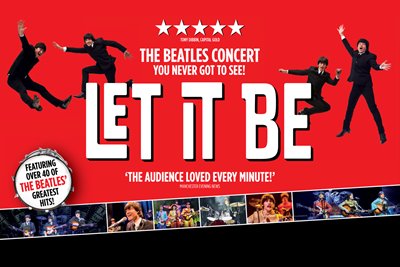 In this blog I hope to exercise my writing skills and to share my love of theatre.

I will be writing about theatre from my experiences as a director, performer, teacher and audience member. I aim to include reviews, books reviews, case studies, research and creative writing around the topic.

If you have feedback, a question or topic suggestion, please do get in touch via the contact page.

Thank you for reading.